Have you always had this feeling or is it only since the v1.1 update?

@Mika hi, have you followed the discussion around acc 1.1 and sc2? we are trying to find a solution there on the forum and as you can see from the links above also on ac official forum.
if so, and if you had the chance to try acc before and after the update, i would like to know your thoughts on that matter, thanks

Thanks, will check later today, not sure what it’s set to

Have tested today by turning off the hands off detection and can confirm it’s all good now. Did a bunch of laps at Zolder changing wheel direction as fast as possible through the chicanes and no issues

When the car is stationary the steering is very light, seems the dampening isn’t kicking in until the car moves. If anything it should be the opposite with steering heavier when stationary compared to rolling down pit lane?

If anyone has suggestions on this that would be awesome

@EsxPaul hi mate, do you use “resonance reduction” in TD?
I’ve just tried to disable it and run acc with the last 1.0.13 TD fw, can’t tell if it’s actually working or if I just didn’t remember how it felt before, but I feel the ffb has changed for the better since last time I tried, weeks ago.
Tell me if you notice an improvement like I did (by the way I am using TD baseline acc profile, just lowered recon to 4 instead of 8).

I just checked my settings and I am not using “resonance reduction”. I’ve never touched that setting and it has always been disabled.

I’m still using the v1.0.7 fw (no baseline settings included) and will probably stay there because it’s been very stable for me.

If you get time, can you post the latest settings you are now trying and I will try them to compare.

Thanks for the tip mate 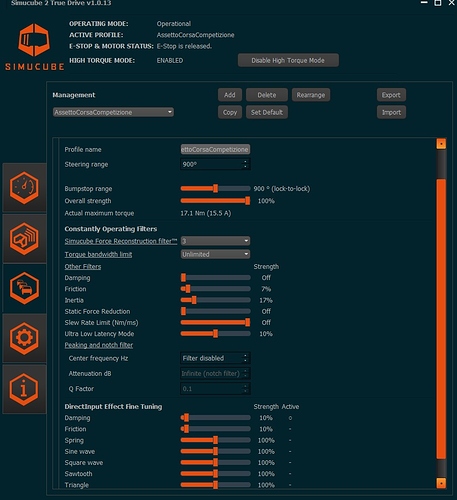 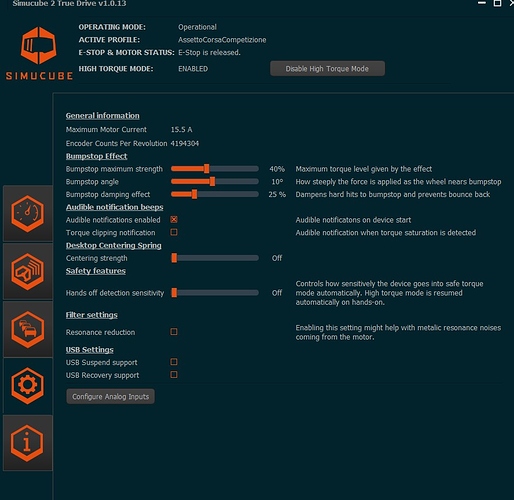 Resonance rediction is on by default, but it seems to make more noise instead of reducing it.

Is it like that also in the latest firmware version?

tonight I found out that for some strange reasons without resonance red. ACC ffb is a lot better than when I had it on. I discovered it by pure chance…I have been looking for weeks what TD setting were, in some way, in conflict with ACC 1.1 ffb, and I think I finally found out what it was…but I need someone else to test it and confirm

@SuperMonaco_GP Thank you very much for those settings.

I just did a small 30 minute test and they are an improvement for me also. The feeling of understeer is more gradual now and the power to the servo doesn’t drop away as fast.

Things are slowly getting back to how they used to be

This is feeling heaps better. Thanks for the share.

Have not had much time to play!

I set recon to 6 to get rid of the “robotic” feel of the ffb, it is quite high but it seems to be the only way to achieve this.

Think I had mine higher using you earlier setting and I was having difficulty finding grip limit … by the time I lost grip, I was feeling it too late. Recon 3 felt pretty good - was thinking about lowering it.

yes, there is a trade off between the grip feel and the need - at least in my opinion - to get rid of the very annoying robotic and digital feeling of the tyres, in some cars more than others.

Are you able to explain robotic ffb feel please? I think it felt fine and was considering reducing the reckon filter to see if grip feel felt better. Understand FFB is different to different people.

the best i can describe is like a digital noise coming though the wheel, which is like some disturbance in the ffb signal. it is something that appeared after the 1.1 update, it wasn’t there before.
i tried playing with various tbw and recon values, and i settled at recon 6 and 2200hz for the moment, those values seems to get rid of that feeling, but i might doing some more testing tomorrow to see if i can lower the recon value, like you said it takes away a lot of details, mostly on the grip limit. I also tried changing the ingame ffb hz selector, but anything lower than 333hz feels really bad to me.

What have you set road effect in game? That makes lots of noise in game. I’ve lowered mine depending on car between 5 - 10%