Can’t even think of anything. I see that your have Resonance Reduction checked, while it shouldn’t cause that severe vibration, some issues with it on were observed in the past.
Do you use any of those “origin shift”, “new physics” CM features?

Turned resonance reduction off, and I have none of the physics tweaks checked.

Still doing it unfortunately, no idea why

Do you have LUT or Gamma in ff_post_process.ini enabled by any chance, check Documents and Steam AC folder.

This is my current ff_post_process settings. 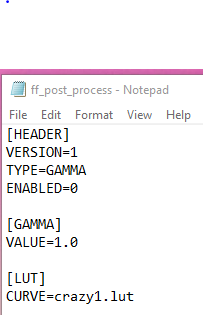 But I think I have solved the issue, I went ahead and deleted the cfg folder within the assettocorsa (Steam AC) folder and then had steam validate/check integrity of files.

Looks like the issue has been solved, I’m assuming there were some left over settings from my old wheelbase that was conflicting.

Thanks for the help! Much appreciated.

Just wanted to say thank you again. Your effort to help everyone is realy appreciated. Hope you use Paddock, so everyone can have your very good setups!

Thanks so much for taking the time to put in the hard work and then post your settings.

I haven’t touched AC for a couple of years but decided to give it another try today. You got me started back up straight away without having to spend hours trying to start from scratch and figure things out all over again.

Your settings felt natural to me straight away. Great job mate

Paul, also try without experimental gyro (just enable it in AC FFB settings and disable one in FFB tweaks), this way you wouldn’t have to use that much dampening, friction, inertia, and ULL, etc. From what I’ve learned it doesn’t really work that great with DD wheels and majority of Kunos cars, except may be few mods that actually benefit from it.
You can tame down oscillation and aggressive SAT snapback with it by using all these extra crutches at the expense of details and overall fidelity. AC in original form doesn’t really need any of that.
I’ll drop my current settings, just in case, increase Recon if you find it too grainy to your taste. 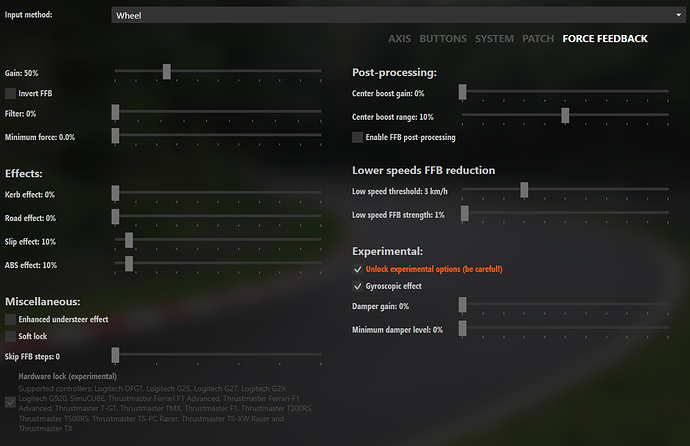 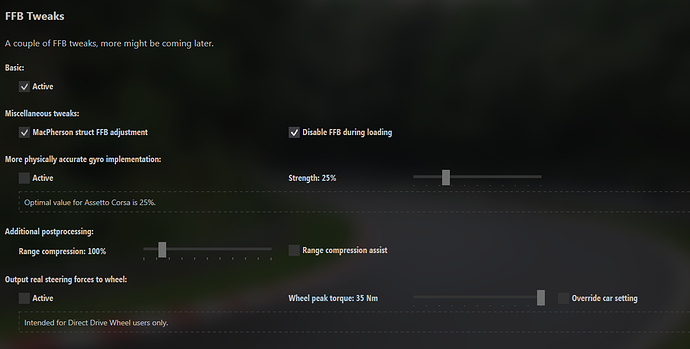 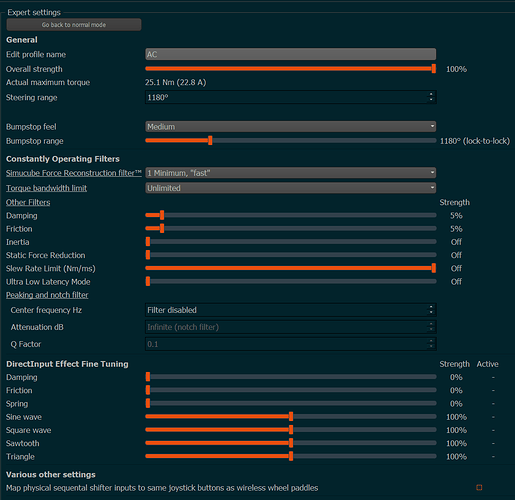 Thanks very much, Andrew

I’ll be interested to give your settings a try later on and do some back to back runs to see which feels more suited to my tastes.

I have been somewhat trying to follow the FFB Tweaks thread over at RD but I’ll be honest and admit that most of what’s being debated and recommend over there has been going over my head!

Hello gents…are these the settings above you guys are talking about ?

I’m currently using these settings from Panschoin and am about to try out the settings provided by Andrew, three posts up

In AC as far as Gyro concerned we have 3 flavors:

I actually have 2 SC2 Pro’s for my son’s…they play only ACC …I would like to let them give AC a try sometime…the file in the SC2 software ? Are they any good though … I think I’ll give these a go later

You mean shipped with TD AC profile? No, it’s not good.

Thanks for the gyro explanation. That’s really helpful.

I tried out your recommended settings posted above. They feel really good to me and now I’ve had time to do some back to back runs, I can see what you mean in terms of a far more aggressive snapback to centre when the FFB Tweaks gyro is enabled.

I don’t actually mind that effect as a byproduct of a slide but it’s really not that comfortable when you hit some big bumps and the wheel whips back to centre on you in a split second. That definitely caught me by surprise and isn’t something I’d want to deal with over a long driving session.

@EsxPaul Hi mate and thanks for your comments. Now to be honest i tried 2-3 months back my own settings (the ones you referred to) and they didn’t feel so great to put it politely. I was too involved with AMS2 and suddenly AC felt crap, or things have changed and missed the developments with CSP. Anyway i tried some stuff but ffb continued to feel a bit horrible. A couple of weeks back i started experimenting again with AC after doing a clean install (i think i might have had before a corrupted file somewhere killing ffb) and things started feeling better. So i am in the process now of finding new settings…once i am done with all the experimentation i ll post them.

@Andrew_WOT while I thought I have concluded that the OEM Gyro is the way to go, I realized that in some cars it is a shitshow, in others it is great. There is too much graininess and overdampening of the wheel with huge delays in ffb at rebound forces. Increasing recon can help with the graininess but the delays are still there and the feeling is kind of crap. Check for example the KTM X bow and the Porsche 917 (I saw that in many more Kunos cars but I don’t remember them now)… Also I realized that unless you put the damper gain at 100% and DI Damping at 100% in TD the dynamic damping effect is too subtle and the rebound and snapbacks are too much. In addition some TD filtering is needed (inertia, SFR). By going that route some cars feel great, but those with the graininess issue are bleh… In the next days I ll try to see if I can find something ok for the route with no gyro (probably with some heavy TD filtering). In addition I agree with you that the csp gyro is weird and doesn’t help at all, I guess things changed with it. Anyway check please if you have the graininess issue with OEM Gyro in some cars as well (while in others there is no such issue), cause if you don’t then there must be something wrong with my game files.

Check for example the KTM X bow and the Porsche 917 (I saw that in many more Kunos cars but I don’t remember them now)… Also I realized that unless you put the damper gain at 100% and DI Damping at 100% in TD the dynamic damping effect is too subtle and the rebound and snapbacks are too much. In addition some TD filtering is needed (inertia, SFR).

That sums up pretty well how “Corrected” Gyro feels. Make sure it’s unchecked as it takes precedence over AC Gyro settings.

And “graininess” can be the result of AC bug when some residual DI Damper effect still remains on when car starts moving, reason it’s all zeroed out in my settings. It was old finding from OSW days.

I’m definitely in agreement with you guys in that the FFB quality seems very car dependent.

I’ve been testing mainly with the URD 911 RSR 2018 and it feels really smooth and predictable. Swap over to that KTM X bow and it feels awful

No gyro can help with lap times, try it out.

Also although i know the problem of software lock when hitting the bumpstops, i set wheel tool and in game at 1200 degrees and software lock on, and i enjoy it more. Ofc it is not suitable for f1 and cars with limited steering degrees but for gt3 it is perfect.

If you are using CSP, just enable Hardware Lock (experimental), look at my screenshot above, that will adjust lock based on car model.
Without gyro you just need more dampening and may be ULL to counter oscillation and SAT, it works, there are pluses and minuses with each approach.
Can’t say I am slower with gyro, but it could be just a matter of developed habit. AC introduced gyro few years after release so we all raced without one before.

You can do some stuff like pass curbs without even flinching with no gyro.