Just something weird that happened. While in GTR2, I got hit in the rear by another car and the steering wheel went full left. Even exiting to the garage and going back out to drive, which usually resets the ffb, didn’t help. Only going out to the main menu did it stop the hard left force.

I use 240 degrees rotation to match the steering wheel in GTR2 if that has anything to do with it.

I wonder if there’s some fancy safety/filtering logic that “detected” the sharp collision and froze it?

Edit: This happened again, not so severe, so I purposely hit the other car again and it kind of came into alignment. Additionally, there is routinely a very slight bias to the left or right but sometimes back to center. It’s weird. It’s like it gains a weight to the left or right after certain corners. I thought it was road camber in some places but it’s not always that, like on a level straight the bias will persists. Interestingly enough if I go around the next corner it’s often changed. I just don’t recall this kind of behaviour on my AccuForce. It always returned to center consistently.

To match the in-game steering rotation and to presumably experience the ffb as they had intended in 2006 on those kinds of low rotation wheels.

This isn’t just a ‘stuck to bump stop’ issue. This is a weird bias of the SC2P towards the last angle you turned more than 30-45 degrees towards.

It’s quite easy to make happen. I just go around tight enough a corner and on the next straight my wheel is pulling to the side of the last corner usually by about 10 degrees or less but it’s noticeable, I have to work against it, and if I don’t work against it the car will go off track.

I tried 360/540/900 degrees, tried disabling all possible options I could find, re-set the wheels control assignments in-game, nothing seemed to fix it.

Just trying AMS2 right now and it’s OK, no problem with rotation bias that I can detect.

Is it some bug in handling old games ffb?

I had a similar problem with my old OSW with race 07.
Try inverting the FFB, this fixed it but may not work in your situation worth a try though.

I’m familiar with that setting, it’s not the same issue. I tried reversing it and it did what I expected (drives like you’re on a barrel and pulls to the outside), then I unreversed it and it felt normal.

It’s like somehow the SC2P thinks it has a new wheel center and centers around that. So odd.

What TrueDrive version? Some 2020.x versions (the last ones) are buggy in regards of bumpstops

EDIT:
Forget about my last words (just on this specific case), because if im not wrong, GTR titles are using DirectInput Friction Effects, right?
Try lower values in that slider

I guess I’ll experiment with wheel strength and bumpstops. 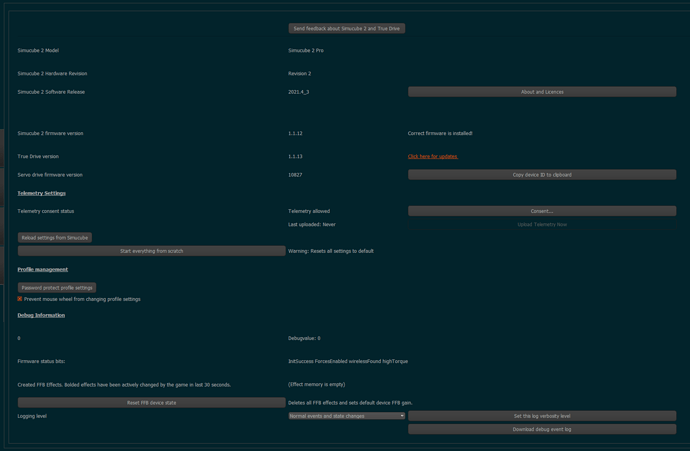 Ah, I found the problem. There’s some sort of bug happening with DirectInput Effect Fine Tuning. They were at 100% when the problem occurred but when set to 0% the problem went away.

These are valuable effects to have in older games, particularly Friction and Damping, as I sometimes prefer to set those in-game as it makes it more universal and consolidated for other people to apply.

So it seems these DirectInput effects are pretty wonky with the SC2, eh? I have another thread where Square Wave effects cancel all steering column forces.

Even just setting Friction/Damper 100% and the others 0% the problem returns.

Interesting: When I pause the game and slide Friction up and down 0 to 100% the wheel rotates as if friction were telling it a new center point? If I slide the other effects this does not happen.

Okay, tried again with every DirectInput effect 100% except friction and the center point bias problem was eliminated. So there’s something up with Friction.

^ SimBin Square Wave FFB Cancels All FFB To the Wheel

Told you!
My hopes are low in regards of DirectInput filters

yep, what is even stranger is that with old osw di effects worked really well, as intended…

Is there a proper way of going about sending in bug reports?

We are monitoring this forum.

However it is impossible to work with developers of games that ceased to be developed more than 10 years ago.

We do know that some games seem to be using some effects directly in a wrong way compared to Directinput specifications, and are considering some workarounds.

We do know that some games seem to be using some effects directly in a wrong way compared to Directinput specifications, and are considering some workarounds.

That’d be great, thank you

I have DI Damper, Friction, Spring all zeroed out in all my profiles.
Things get wonky if title is using them even in modern titles. Check DR 2.0 for instance and what happens when friction is not 0.

Given that the other effects are working is it perhaps an issue with the SC2 implementation of the Friction filter, rather than a bug in how the game delivers it?

My 2015 AccuForce never did have a problem with any of these effects. OSWs didn’t have problems, apparently. Makes me wonder.

You are a Lucky man that not need Emuwheel to play Forza Games!

However it is impossible to work with developers of games that ceased to be developed more than 10 years ago.

Why talk to developers when beta testers like US are trying to help?
Give us some tools and good communications between GD and us will do the rest.
Problem here is SC2 is not capable to delivery what any other wheel in the market can.

That’s interesting. Why do they do that? I would think friction should only be in effect when wheel rotation is happening?

It actually worked just fine with Argon OSW. Haven’t tried it with SC2 though.

This happens in GT Legends even when I set all DirectInput Effects to 0%. It can happen when you hit a car or hit a wall or, it seems, just any sharp movement to one side.

Is there some programmatic check for “overly fast acceleration of rotation” and responding with some safety response?

The problem is often it turns all the way to the left and sticks there and you can’t get it back. You have to exit the game.