Which is the best Direct Drive motor? Simucube developers will find out

I love by big Mige. The ffb is great.

Hello Phillip, I hope all is well with you!

Indeed. I was surprised by the high rotor friction on the “big Mige”, and it could be that there is something mechanically wrong with my unit of course. Do you by any chance have a big Mige connected to a servo drive so that you could perform a simple test? That way we can see if both our units behave the same way regarding friction or not.

Ha Fredric, it is you

I have small Mige here, but large Mige feels very similar. Is yours behaving strange when powered, or also unpowered?

send me this simple test and i will try to do it when i have time.

If it helps, I still wait for my steering wheel to arrive but Big Mige is in the house

I have Augury kit and yesterday Installed the keyway (cotter) to the shaft. I used rubber mallet to hit it and after that some other tool to made the keyway equal on both sides, I had some spots on keyway where I hit it but while I do that I had the shaft in my other hand just for safety and possible damages. I saw from side and the shaft is at 90 degrees with the ground like it was before I started the procedure. Installed QR and tried to rotate the shaft. When unpowered it has a little noticeable friction which is normall I quess becouse the motor and the shaft are big so when they rotate they move something inside which is what we feel. I am not an expert at motors but this was the same feeling before I installed the keyway and motor was untoched. This was my biggest fear also, how to install keyway and not damage something while hitting. So I guess this very little noticeable friction/cogging while rotating the shaft when motor is unpowered is normal right?

I thought we would run a simple test using an ancient FFB tool named fedit. The test will be to set fedit up so that it generates a constant force effect and you will gradually increase the force until the rotor shaft starts spinning. When it does, take a screenshot of fedit so that we can compare the force level. Preferably unmount the wheel from the shaft before test.

Here is a link to fedit: https://drive.google.com/file/d/1X2RVvvNTKikCYjFQJ-vuEaAmp7SOfUPO/view?usp=sharing

Torture testing a direct drive motor with cast iron flywheel and 40 Amp current to accelerate it. After a while the motor is running burning hot (80C). It’s necessary to heat it up to see if motor’s magnets start to demagnetize, which would lead to permanent torque loss (motor damage). Good motors are just like new after the torture. 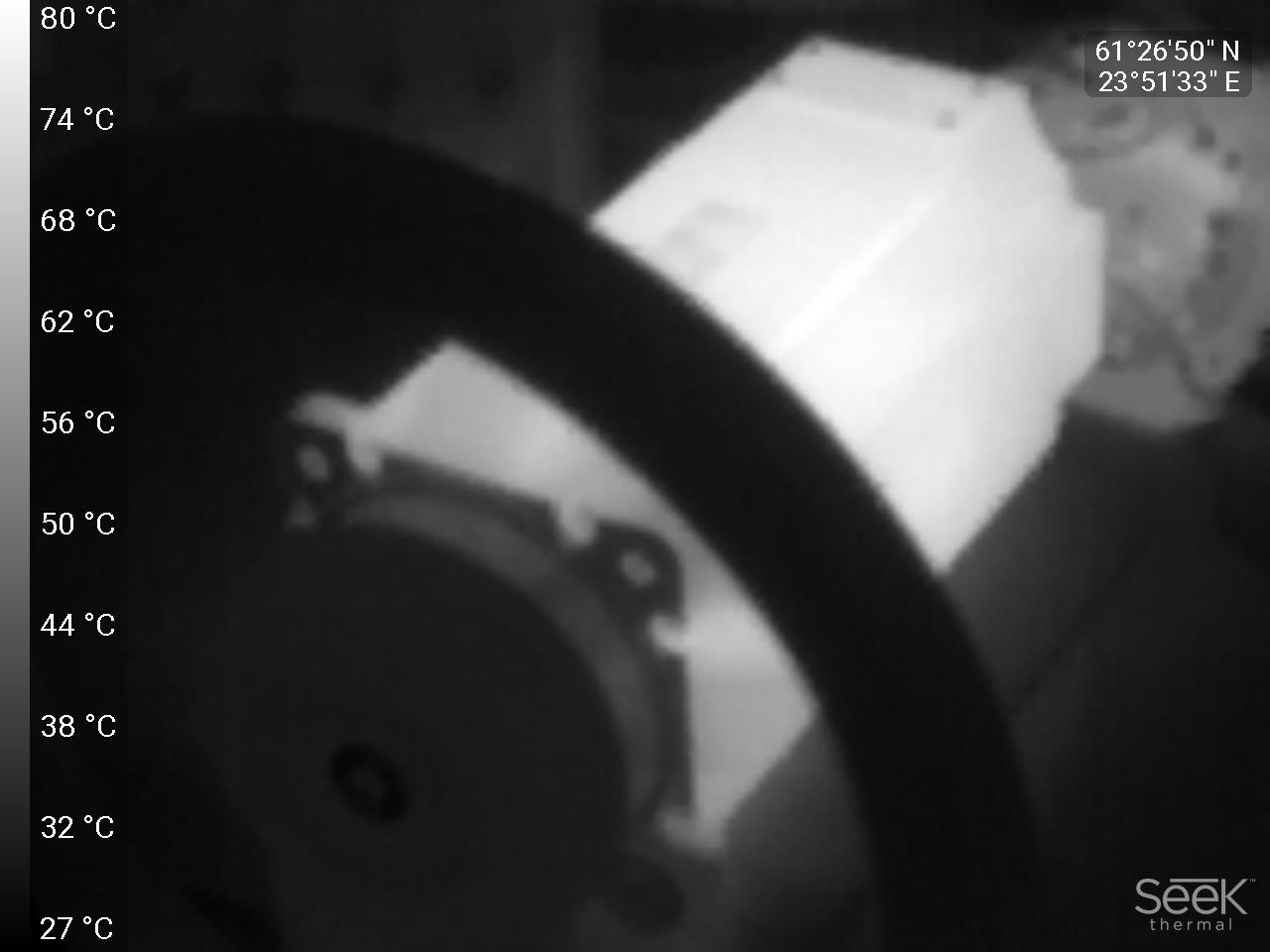 I know this type of testing takes a ton of time and effort so I hesitate to even ask… as someone who has been staring at their 8040 frame for a month I was curious if there was an estimate for the release of these results. If they are a few weeks out I can probably continue the stare. =)

Just ordered my small mige, might have been smarter to wait a few days after reading this, but alas.
Will be better than my broken T300RS anyway

Torture testing a direct drive motor with cast iron flywheel and 40 Amp current to accelerate it.

@Tero: I did not miss that comment, by the way

I expect what we will be learning is that we have loads of choices of great, better, and best. It is actually difficult to dream up any complaint about my Simucube-powered large Mige.

Same here. I love my large Mige. If there are better I want one. lol

As has been pointed out over many posts, differences in ‘feel’ between the motors isn’t ever going to be ‘earth shattering’, and in many cases it’s very subjective and one person might like the feel of one motor for reasons most won’t.

A friend of mine recently upgraded his 10K encoder to a new Biss-C, and is seriously considering going back to his old encoder as he feels that he has lost a lot of the feeling he liked about his small MiGe 10K setup.

Of course, the data will be interesting to see on the other motors.
I just won’t be necessarily equating it with “It must be 10 times better than my current motor” mentality, especially when the data is in many cases imperceptible to 99% of humans

Obviously the gains aren’t going to be as big as say going from a consumer wheel to a dd wheel but it still might be worth upgrading depending on what you are looking for. But that’s why there are choices.

The only issue is that you end up buying on other people’s opinions/sensitivities.
Would be nice if you could trial motors and choose the one you like the best.

Bottom line will be cost and availability.

In the USA most people wanted the least expensive OSW.
Not many on the grand scale bought the more expensive lenze and AKM unless they bought a Bodnar or Dennis Reimer

In the USA most people wanted the least expensive OSW.

I’m not sure this is completely accurate. Without real data behind each motor it is easy to just go with the mige since that is what everyone else has. It is hard to spend more when people have a tendency to rationalize their spending by believing their more costly motor “feels more direct.” Give me the data and I’d be happy to spend more (or less) should the data point in that direction.

I was the only person who built and sold OSW in the USA and it was very true in my case. People did not want to spend the extra $$ for the AKM or Lenze. It was a very small percentage.

The data is on the sales numbers.

They also did not want to spend the extra $$ for the beautiful CNC HRS hubs etc. I still have boxes of them.

Why buy an AKM or Lenze when there is no data to support their higher price? Everyone knows the mige works and has the most community support. Previous motor reviews have been highly subjective and I’m hopeful this review will change some of that.