Which is the best Direct Drive motor? Simucube developers will find out

SIMUCUBE developer team has been testing and comparing different precision industrial grade motors to find out how far the direct drive force feedback experience can be stretched. We have collected data of over 30 motors, ran calculations on them, and in-hand tested dozen of the best candidates in the SIMUCUBE lab. We are ranking motors by response speed, inertia, torque stability - and of course, the experience in racing simulator. 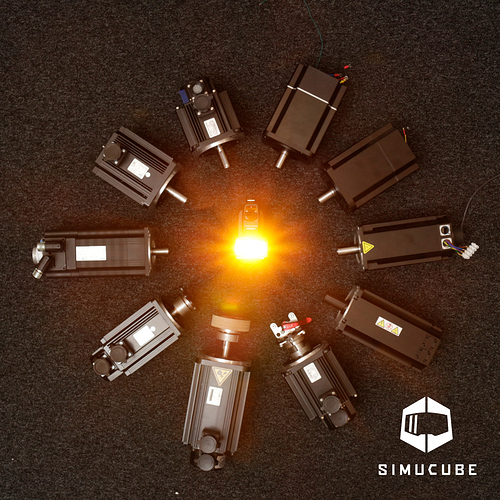 Will Granite devices be selling the winning model?

Hope those results will come soon

Have you tested them with Switching psu or with linear aswell ?

Did you try them with only 48vdc or 36,24 aswell ? Some servos have lower winding resistance and would be nice to have official data.

Will you give back emf voltage measurements ?

Did you use manual tuning method for tuning torque controller and if yes , will you provide tha values of coil resistance and inductance you found out optimum for each servo ?

Great…I can not wait to see the result… I see Stepper Motors in the screenshot no ?

No steppers, those are all servos, some pretty special ones visible …

We have switched over to Granite Devices some time ago. The SimSteering2 motors were causing fire hazard/safety issues and we are happy we switched. We are using Sanyo Denki 750w motors with a manual lock.

“best” is a subjective term and looking forward to what your empirical criteria is and how its measured.

This will be a lively thread for sure. Thank-you!

Some tech testing insight: we have measured back EMF constants, resistances, inductances and compared them to manufacturer’s data sheet to see if they’re true. We also measure torque cogging, ripple, constant and linearity. Then we also calculate and measure torque slew rate (Nm/ms), a.k.a response speed. Surely we’re not forgetting to calculate and test their power supply and voltage requirement, and test of how many revs per second motor can produce the maximum torque. At this point we can say that the found differences are quite significant

It looks as if there have only bigger motors been tested. A comparison with smaller ones like those from the compact series of Sim-Plicity would have been interesting too.

Using smaller motor is possible, no practical limit how small motor you can attach to Simucube. Just make sure that encoder is compatible type (something that people have used).

I doubt I’ll be buying a new servo.
I have the small MiGe (latest generation) with a 2048-line/21M resolution SinCOS encoder and whilst I am sure the test data will show things that look like they are statistically significant differences, I seriously doubt that the average SIM racer could tell much more than extremely subtle differences in a blind comparison if all servos were running at identical forces (nM) on the simucube platform with the same encoder.

Of course the uber expensive KollMorgan/Lenze servos will undoubtedly feel somewhat ‘smoother’, but I never had those units in my budget anyway, so without having ever tried one I will stick with anecdotal feedback from the many reviews out there, many of which felt the small MiGe with the latest Simucube Ioni Pro HC hardware was so close to the feeling of much more expensive servos that the expensive units didn’t warrant their price, unless of course you just had money lying around to spend.

When I first got into OSW, I was helped a lot by Jason Jodarski who has extensive build experience with OSW all the way back to when people had to source parts from multiple places to build what were essentially ‘Frankenstein’ OSW’s

Jason had the choice of keeping any servo he wanted (KollMorgan, Lenze) in return for all his work, and what did he choose and still uses as his favorite? Small MiGe.
Go figure!

Of course, someone with a KollMorgan will vehemently disagree.

I’m sure there’s very subtle differences, but trying to justify such very small differences for very large price differentials is not a good proposition for most.

As I understand, with the current SinCOS encoder I have, any higher resolution will be near impossible to feel via human senses, and only data will show ‘improvements’ between servos.

What really needs to happen is SIM developers to make their data much more precise for our hardware to pick up on it, and we might be waiting a while since OSW/DD owners represent a tiny fraction of SIM racers.
All games/SIMs are developed with the majority in mind.

Different servo-motors will have different response-behaviours too, it is not all about resolution and torque, but the servo-inertia and a few other factors allowing for quite significant different tactile behaviour.

My current servo of choice is a monster AKM65L, able to deliver 38NM from the Ioni-Pro HC, but what I love about it is the natural damping, brought on by the bigger inertia whem compared to many other servos.

ps: I think many will be surprised what Tero and GD"s testing will reveal

I understand that much more powerful motors will feel different from lower torque motors, but to be clearer, my point is that the data will be more for analytical use as opposed to being a ‘servo buying guide’ where a new Simucube customer would buy the motor with data that was more ‘ideal’ but not necessarily enjoy that motor feel, or feel a massive tactile difference in the steering feel.

I have tried the large MiGe and am glad I have the small MiGe with the SInCOS encoder (21M).
It’s much ‘livelier’ in my opinion and offers FFB subtleties that I felt were ‘muted’ with the large MiGe.
I do however understand why some would prefer the ‘heavier’ feel the large MiGe offers.
And that’s why a motor should be chosen - driving feel is a very individual factor.

I like strong FFB, and I’m nowhere near 1:1 in most cars in iRacing.
I have my Sim-Labs P1 in black arriving today, replacing my Rseat RS1, so maybe I will find that this new rig encourages me to turn things up!

I too am keen to see the results, at the very least to satiate my geek’ish tendencies.

Very true and a good point. There is a whole engineering field just dedicated to servos and servo control, as there are in bearings, stater assemblies and other components. One of my engineers once showed a huge book (volume) on just ball screws. Lots of science in just a simple screw!

As for OSW. I can definitely tell a difference between an OSW controlling a MiGe and a Sanyo Denki (SD). A SD feels smoother and more responsive (all subjective references).

Nonetheless, would be great to see the evaluation criteria and the numbers… Price is often the determining inelastic factor in this community.

Lols, just keeping fit and doing 6 days ave/week in the gym where possible. It’s amazing how easy things become once one is a bit fitter than the norm, but irrespective, DD wheels are heaps of fun, fit or not.

Great to have the ability to adjust the torque to ones personal preference, from mild to wild

Coming back to the photo-teaser Tero has posted, that is an awesome shot by Aki, using an external speed-light to great effect. Please give my compliments to Aki on the creativity of that shot, please Tero!!

Coming back to the photo-teaser Tero has posted, that is an awesome shot by Aki, using an external speed-light to great effect. Please give my compliments to Aki on the creativity of that shot, please Tero!!

Actually, it was @Jani.

Ha, very nicely done then, shot is so good, I thought it was Aki’s work

Very good and useful initiative, thank you! Lack of this overview knowledge has been an issue since the beginning and I among others have effectively done guesswork on what motors to use.

A question though: have you considered static and dynamic rotor friction? E.g. friction from rotor stationary to moving state.
I ordered a “big Mige” (130ST-M15015) this autumn to use as victim in motor drive stage HW design, and I found it to be very bad for FFB due to its high rotor friction.

@Pax: Huh, what? Don’t agree with you on that assessment, sorry…I have tested many servos over the years, including Lense, AKM, a number of Miges and quite a few other brands, and unless you do back-back testing, it will be difficult to highlight significant differences.

Of course ffb is subjective to each user, but things are not so clear-cut where servos are concerned, to the less experienced user…