Why I can’t feel so called slip angle when I am driving on the limit with ACC with simucube 2 PRO?

I have included image of the theory of slip angle.

As far I have understood, when you are on the edge of the tyre limit, the steering wheel becomes lighter and you can immediately feel that the tyre is slipping out from the safe grip area.

In the old assetto corsa you could enhance this feeling by accepting such a option called “enhanced Understeer Effect” which helps to feel the slip angle and tyre limits. However I have been told that this option is actually unrealistic and therefore not included in a new Assetto Corsa.

So please let me know what is wrong? Are my settings of the wheel bad? Is Assetto Corsa Competizione tyre modeling still somehow bad? Or what? My friend just tested simucube 2 and was wondering why he feels the slip angle with Logitech G25 but with my simucube 2 wheel the effect is simply missing.

Yes I can feel all the other road effects very clearly but this essential feeling for the driver, the slip angle effect is not there at all.

Please help me with this issue. Thank you in advance.

The settings are default settings. Also in ACC I do not use road effects, gain is 21%, dynamic damping 100%. I have tested dynamic damping to be also 200% but no slip angle feeling at all. 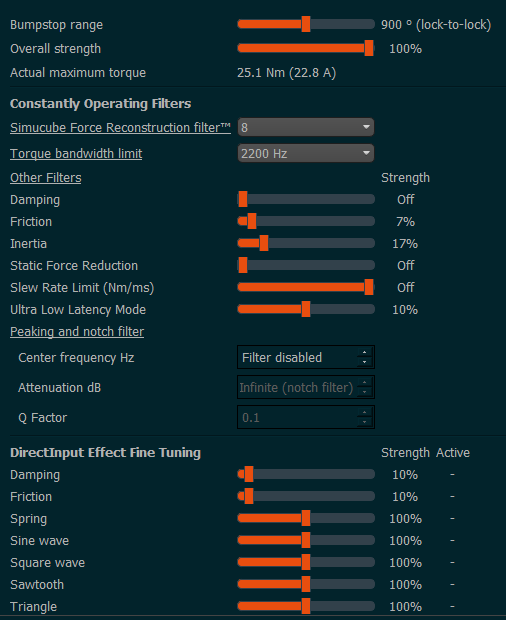 Here is a link to one of the developers of ACC that explains the tire grips and why they don’t have slip angle grip.

I watched the video. It seems that they have gone nuts at Kunos. The driving simulator without the feeling what is happening at the front of the car is simply pointless. I can drive the old assetto corsa much, much better than this new ACC. I hope Kunos realizes this and puts back the slip angle feeling or goes bankrupt. No wonder so many people are disappointed to ACC - there simply is no any sense in it. The steering feel is simply dead.

I have played and own also rFactor 2. Its so sad that nobody plays it at the internet. It has so much better physics than ACC that you cant talk about rFactor 2 and ACC at the same day.

IMHO if they dont stop this idiotism at Kunos they should and they will disappear from the markets.

Seems you didn’t understand the video at all.
BTW: For a first posting here you quite chose the language,mate. Also wrong forums to complain about ACC.

Kunos goes bankrupt? disappears from the market?
Everything ok bud?

you know there are Kunos devs in this thread right? just saying

I invested much time trying to convince Kunos to allow us to have the benefit of choice through adjustable understeer effects but, my pleas were completely overwhelmed by the vast majority of members in the official forums. Kunos eventually put their foot down and stated “it will not happen” so just go away!

If you want to experience the best under-steer effects in ffb, I suggest rF2 and AMS. Both are excellent imo, as they provide a very strong sense of front grip-loss with variability for judging how hard we are pushing the tires, something that even AC is not particularly good at although, much better than ACC is.

The problem with the under-steer effect that does exist in ACC, is that it is way too subtle and can only be felt with little to no filtering. The result is the same when testing using the AccuForce. If we want smooth rubbery ffb, we’ll not likely retain the subtle under-steer effect.

This is exactly the reason I tried to convince Kunos to build in some adjustment but, the community did not support my view. I have moved onto other titles that do a much better job in communicating under-steer, which - pretty much, all do with the exception of iRacing (imo).

So what . . . this is not their forum. They can insult, delete posts or ban members in their official forums any time but, I don’t think they have such rights here. Of course, I could be wrong.

Don’t misunderstand, I truly appreciate the title’s they’ve created in AC / ACC but, I’m not a fan of their autocratic approach regarding how we should experience ffb, nor the way they place limitations on players when they could have improved on what AC already offered. I don’t believe I’m the only person that is very disappointed in their choice to do so.

Yes, I do not understand this attitude at Kunos. However this very latest version 1.3.2 is a bit better, but only a bit. rFactor 2 is indeed better by FFB than ACC. People can vote with their wallets…and so they will.

Too bad speaking with our (relatively few) wallets is not enough. The majority of players are fine with ACC FFB the way it is. Some don’t know what they are missing, some don’t have hardware that highlights the difference, or some simply don’t care. In any case, AC and ACC are successful from the sales POV. I just don’t think I’d get in line for Kunos next title based on ACC-ffb…

Are you guys running dynamic dampening? If so don’t. Its subtle but it mutes the ffb somewhat. Not saying anyone doesn’t know how to drive but the slip angle window is very small and once you learn to stay in it there is understeer effect. Problem is its very easy to turn too far and steer right though it.

dynamic damper is the equivalent for gyro in ac, so…better use it imho.

Its not the same. Its an evolution but there is no reason we need it. I just had someone on the ACC forum complaining of this with a simucube pro and he agreed off is better. But what you like is what matters.

Not according to Kunos. There was a lot of debate early on and they chimed in. Yes that’s how it started but that’s not exactly what it is anymore.

My opinion on it is it just adds a sort of dampening to the ffb and mutes some stuff and does weird things with others. Like when the rear steps out.

Need to try with it off or with lowered value as I did find ACC FFB less informative than AC.
The problem is that VR is not actually working and going back to flat screen is so dreadful.