You can check the changelog for any differences.

until that slide has finished doing what it needs to do

This is one of the most frustrating aspects of ACC for me. The slides just seem arbitrary and I have to crank up the tyre noise to hear the (oddly-chosen) effects as the tyres wash out across the track. Not knowing whether the car is going to slide or spin is antithetical to sim racing game design, IMO.

As Panschoin said “once the slide starts there is not much proper feedback coming through” and I think that’s the main thing we are all looking to solve.

Yes, the sudden loss of information is like a sudden reduction in picture resolution from 4K to 320p. I watched Aris’ video several times now, and watched a few of Niels Heusinkveld’s as well, and I just cannot understand how Aris, who surely has driven GT cars at the Kunos HQ at Vallelunga (a circuit I have been to several times and know fairly well), can be pleased with the handling characteristics in ACC. In rF2, if you drive the 911 Cup car, for example, you can clearly feel the effects of introducing increasing degrees of slip angle, and within certain ranges there is clear bite, while those get more vague at other angles and under acceleration, which is how the car feels in real life.

When I go back to RF2, it feels a bit unreal and almost too strong a sensation. I am not a good driver, and this is very subjective of course, but I am enjoying this thread as we as a community search for the holy grail of perfect FFB in ACC (myself included)!

I do not think rF2 adds unrealistic levels of FFB, especially since they can be toned down and you can change the in-game strength (per car), introduce smoothing and edit the JSON files to considerable degrees of detail.

So, back OT: Does anyone know why ACC outputs tyre scrub to telemetry (SimHub sees it) but it cannot be amplified in TD?

In all their wisdom, they removed ‘seat of pants’ from the FFB. It’s a shame because the seat of pants is the best feature of regular AC. You can switch between cars and tracks and as long as you’re a good driver, you can come upto speed quickly driving purely on feel. It also makes setup changes easier as you can feel how the load is moving around on the car. What you often see is people on here and other places struggling to find some magic settings in software to bring back this seat of pants feeling in the FFB when it’s simply not there.

Maybe the dev who did irffb for iracing can do something here.

What AC SOTP we are talking here?
ACC Road Effect is meant for non steering rack forces. And it works great. I am driving AC and ACC every day, side by side. Can’t say I miss anything in ACC feedback, quite contrary.

BTW, there was some interesting comment from Mika, may be we will have generic telemetry FFB in TD after all.

IRFFB reads the iracing telemetry values (car slip angles and such) and generates the seat-of-pants effects based on that. Currently Simucube does not have this functionality on its own, but we are working on it

Note, that IRFFB very easily installs a third-party software called HidGuardian which blocks all games and also True Drive from accessing/connecting to the wheel.

IRFFB reads the iracing telemetry values (car slip angles and such) and generates the seat-of-pants effects based on that.

You answered your own question with the quote you posted below

“IRFFB reads the iracing telemetry values (car slip angles and such) and generates the seat-of-pants effects based on that.” AC already does this. I recall you’re an advocate of “I don’t use any ffb effects sliders” so if you’re running vanilla, I’m not surprised you can’t tell a difference.

I rather be given extra info and filter out what I want than never have it in the first place. There’s a reason why irffb SOP is popular btw.

Anyway, subjective preferences aside, no setting in acc or td is going to give you SOP feeling in ACC currently.

AC already does this

There is no SOTP in AC.
This is break down on AC FFB from Stefano himself.

“Slip” effects
Tyre slips (all 4 of them) -> ff vibration

“Understeer” thingy
I won’t acknowledge its existence, it’s all a government/illuminati conspiracy

Whatever comes from the stuff above is then send to the “FF Post Process” system that will either leave it intact or pass it through the gamma or LUT provided.

And explanation from Aris on ACC

That’s where the FFB “Road Effects enhancement” comes into play.
Normally from a bump, the wheel/suspension gets a force and goes up but at a modern suspension there is not significant bump steer so the actually steering wheel doesn’t really moves. Try it on your real car, juts find a bumpy road and touch your steering wheel lightly. You’ll feel the bump as a noise and on your body but you will notice that the steering wheel doesn’t move at all.
The “road effects” takes that slight force and amplifies it to the point that it moves your steering wheel. If you disable it, you will not feel anything at all, except some particular big bumps or at very high speed with cars with high downforce, limited suspension travel and big bump steer and more than 40ish mm scrub radius.

Dude, those effects combined is exactly what SOP is. Those things I’d feel through my ass, are now coming as signals through the wheel. So I now have additional data points to feel what the car is using.

Be more specific on what you mean, road effects are present in both, the only thing that is missing is separate slip effect in ACC.

Automobilista 2 features a rather simple but highly accurate FFB system, very similar to the RealFeel system used in its predecessor AMS1 - in both...

Here’s the key thing for me that is missing in ACC:

FX : Adds a little vibration from the engine as it goes through the RPM range (very faint, and linked to the engine´s actual angular velocity); it also adds a “Tyre Scrub” effect, which is a function of tyre vibration that would naturally transfer as vibration onto wheel rim, driven by actual physics signal.

I have tried raising the “Road Effects” setting in ACC to try to achieve the AMS2 “FX” result, but it does not appear that it’s the same concept.

As of right now, only rFactor 2 and AMS2 have tyre scrub that gives me the information that I need in order to feel what the tyres are doing, and that there is a connection between the car and the road.

I will be trying IRFFB in iRacing as there is an understeer effect from telemetry that becomes available for the FFB.

In ACC, I did try to use a transducer to give me tyre slip, however, it started activating any time I put the steering angle past 15 degrees or so, when the tyres were not actually slipping, so I had to turn it off.

Broken record here, but I would really like to understand why Kunos has decided not to take this FX approach that Reiza has when it comes to steering column torque, and why ACC has a dead feeling when the car is on a straight or in a slide.

What you can try, is to play with the response filter for that particular effect so that it doesn’t kick in too early.

You have Gamma, threshold, minimum force and input gain. You can try tuning those to suit what your body/brain expect to feel.

I find the best place to test this is the long right hander after the first chicane at Monza. Try going through that at a high but steady speed and play with the threshold till you can get it at the point where you think the effect should start to kick in. From there, you can adjust the Hz, gamma and min force to get the feel you’re after.

Nice! Do you have a screenshot of your own gamma charts?

Something interesting I’ve noticed today after playing with LUT.
Seems like with ffb post processing enabled I completely lose Tire Scrub effect, and it definitely gets back with it disabled.
Just check if you have Documents\Assetto Corsa Competizione\Config\ff_post_process.ini, either delete it or set ENABLEd to 0.

I don’t see the ffb_post_process.ini in my folder… 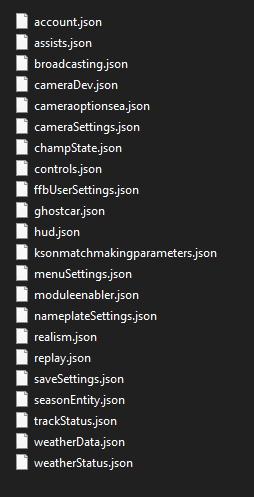 you sure you mean acc and not ac? 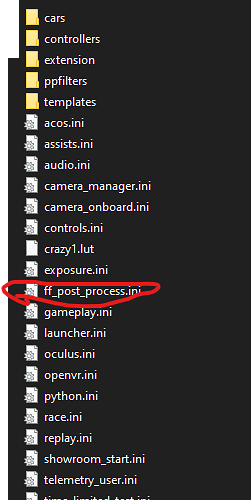 ACC just like AC supports gamma and LUT, you just need to create ffb_post_process.ini in that folder. Same content as AC. It works, you can check ACC log to see how it got picked up and applied.
https://www.acc-wiki.info/wiki/Game_Settings#Tweaks
Except they slightly messed up folder name, it should be ‘Config’ not ‘cfg’.

We have tried playing with various LUTs a couple of weeks ago but did not notice any issue with scrub. Also it didn’t seem to add anything positive, so the whole idea was discarded.

Did it actually load, I definitely had bumped low level details like road effect but scrub was gone, completely.

If you check AppData\Local\AC2\Saved\Logs\AC2.log you should see it gets loaded and applied.

But I’ve come to the same conclusion, it’s not worth it.
Original FFB as is is better. I even dumped SFR, it was making wheel mushy when cornering.

Hi all, I’ve tried many settings recommended by many contributors, fiddled with many settings and I was always feeling undecided and confused about how the FFB felt and continued to chase “the perfect FFB”.

IIRC 2 weeks ago I saw a post by @Mika stating that the simple mode would be sufficient for most people and decided to try it. After trying various combinations it felt pretty good with Smoothness: Minimal and Damping: Raw and I decided to stick with it for ACC; I can feel the tyre scrub, car feels connected to the road and FFB is lively.

Instead of trying to catch the tail of the dragon I think it’ll be much better to stick to one setting and get used to it. So, give it a try and let me know what you think, cheers!

I had better “feel” of the front of the car with my $150 craigslist TMX wheel than I do with SC2pro after 2+weeks of adjusting every setting there is including setting up profiles based off posts here and tweaking each one at a time. I looked for the ffb post_process.ini and its not there. The front tire traction / slip is SO VAUGE it’s impossible to tell what the car is doing. I’m finding it nearly impossible to get a car consistent at 97+% of the limit whereas I was fully able to drive on the ragged edge with my TMX very well.