Been a long time! I still mostly love my SimuCube, but I have 2 issues that are currently annoying me a bit, so forgive if the text is a bit direct.

Issue 1
Back in 2019 I complained that the end stop force can’t exceed the “Overall Strength (Nm)” you set in your profile. This is still the case. In 2019 Mika replied:

“For some reason which I can’t remember anymore, the early Simucube 1 beta testers (before the first public release) said that there was indeed a notable difference in FFB smoothness when the final scaling step was changed so that it was done on the servo drive. However, it can be experimented with again for sure. If the final scaling is done before sending the value to the servo drive, and user uses for example 50% of the force, the resolution is reduced in half. On Simucube 2 Pro, this would be in steps of 1.5 mNm (millinewtonmeters). So, I really wonder if it really was placebo back then…”

On a 30cm diameter wheel, the resolution at 25Nm would be a force of each hand of 2.5 gramms, 0.0025kg.
That is, per hand, the ‘weight’ of about 2 liters of air! It is really very tiny. I can’t believe anyone can feel this in a blind test. I think people passionate about their hobby easily over estimate their ability. (Audiophiles for example…)

PLEASE reconsider this, it really feels like such a letdown that the system, VERY capable, is hampered by not having an end stop when you prefer to run lower overall forces.

Issue 2
This is a bit harder to test, I tried to get Fedit (ffb test util from 1999) working but it isn’t happy on a modern system.
Game settings magically override the end stop set in the True Drive software.

I think maybe, the wheel is still accepting game forces when you’re in the end stop.

The logical behavior, in my mind anyway, is to fade out ALL the game stuff once you hit the end stop, and fade in the end stop. Soft/Medium/Hard can decide wether this fade angle is 10 or 20 or 40 or whatever degrees, but once in an end stop, stop listening to the game.

Slightly annoyed…
These 2 issues prevent me from enjoying some drifting I wanted to do with a power assisted low force car, but I can’t have end-stops this way, despite having an amazing FFB system that is definitely capable of doing this just fine!

PLEASE consider looking at this again as I can’t see how any majority would see these issues as ‘desired behavior’… But maybe it is just me.

That’s very strange, seems as if the game is over riding the true drive settings.

Getting back to your issue, I don’t know if this has anything to do with it but I noticed in your video that your ingame wheel rotation isn’t matching your wheel. I wonder if that could be confusing it for some reason

But I get what you are saying, no matter what the game is telling the base the bump stops should always apply max torque

I’d also wonder though with torque settings so low in true drive does the wheel even act correctly? Does it even counter steer how it should? In AC I run overall strength at 12.5nm with per car FFB set between 20-30%. Sustained forces while counter steering are probably around 3-5nm

These are my AC settings for example 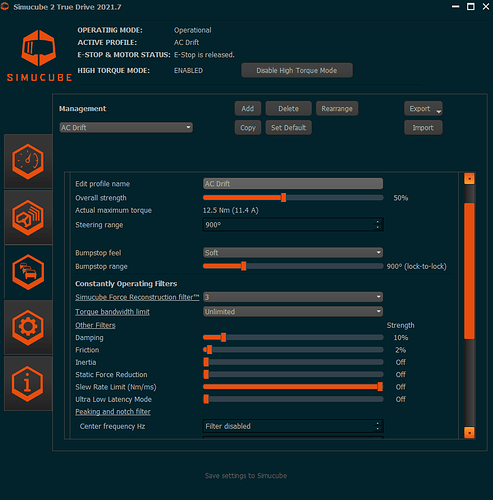 Current implementation indeed has such fade setting as you describe, and it is not possible for game effects to overcome bumpstop anymore.

I looked at the video. Does that game use the device FFB gain to scale forces? There are separate scaling for each of the running effects. If a game wants to reduce FFB levels, then it should be done by adjusting the strength of the effects. According to our implementation, the FFB Device Gain is a setting that should scale all forces generated by the device.

Is there any other game than AMS 1 that has this other interpretation?

I have changed the implementation now and invited Niels to test the beta that includes the change.

Just curious why not keep TD at 100% and just lower in game gain, wouldn’t this way end stop operate at full 25Nm without losing resolution?
Is there any practical advantage in keeping game gain high and TD low?

I dunno what TD is, but in game gain, in the case of AMS (and probably most RF1 derived games) also lower the end stop effect in the current not beta version of the SimuCube software. But in the beta version Mika kindly made for me, all is good, high SimuCube torque, with low in game FFB by reducing in game gain.

TD is True Drive.
Guess AMS is using Device FFB Gain as Mika pointed out as in other titles end stop gain depends on TD max force, not in game gain.
Glad that we have solution for all titles now.

I know Mika has already addressed this… But with ISSUE #1:

This is why it was generally at times better to run higher strength through the wheel and let the game scale down the forces that entered the Wheel Systems. The byproduct of this though was that in certain games (iRacing) where it runs an Attenuation FFB system it allows the wheel to recreate massive forces (if the wheel is set to) while having low average forces.

I am guessing Mika would know if it is possible to open up the Hardware Amperage to the bumpstops in programming on the fly, but, I personally can see some issues there as it could affect the feel of the ramp in to the bump stop as it would be scaling both the signal force of the bump stop AND the electrical capability of the servo at the same time (since the two systems are separated).

As for ISSUE #2 - That is just sort of weird but I am guessing that something got crossed up a bit in the Direct Input Effects and it sounds like Mika has that all figured out.

Yeah, it is likely that we are going to change this at some point, but people’s profiles would also change and feel different due to damping/friction/inertia having a saturation applied to them when the limit is done via the servo strength rather than scaling the input signal to the servo drive part of the wheel base.

So we will have a larger update that would offset the harm of the settings hassle. No ETA and concrete plans, though…

Maybe a selection point in an advanced setting where a user can select Signal Attenuation or Hardware Attenuation… Then they can choose what feels best to them… For me of course it has felt best to have them separated (and i think that might be part of the issues that I have had at higher torque levels with other brands of wheels that I have tested. Of course cant be sure because they don’t have both modes) I think the SimuCUBE is the only one that doesn’t MESS with the signal (which is a benefit).

The other option would be if it is possible to bump the hardware amperage on the curve along with the ramp-up for the bump stop. This would take much more thinking though as you would have to find a way to get it all to ramp smoothly under any circumstance. It would though allow for signal and hardware to remain separate when dealing with output force.

both the change to make this controllable (scaling the game signal or output current of servo drive) would require many, many changes in the current firmware implementation. Also profiles would need to be thought out - damping/friction/inertia would change according to mode at least a bit.

Bumping the current dynamically does incur some filter resets on the servo drive, which would incur notches in the feel.

I can say publicly that if we implement the change, we will do it in some future update that will include many new features that would offset the harm/hassle of the filter options changing.

Can’t they just coexist like in other DD wheels and MMOs.
Add another slider, signal gain, default 100% so it’s compatible with all existing profiles until people start messing with it.

Th SimuCUBE alters the actual Physical power delivery of the Hardware based on your setting so the signal itself is never affected.

Thanks, with OSW and SC1 with MMOs we could controls both, power in Granity and signal gain in MMOs.
Just adding extra slider for signal gain will solve this issue, I think we had some discussion a while back on why TD does not allow signal scaling as it might be beneficial in some cases over cutting power down.

Yes MMOS did have the ability of actually doing both, Not exactly easily but it was there.