I started with 0.11.2, as it seemed prudent and I didn’t immediately have any indication as to what may have been installed from the Factory. Then, attempted to install 0.54.4d. And I’ve had zero luck proceeding beyond that. Constantly receiving errors about the drive’s firmware not being correct. I went back and set Simucube to DFU mode, and installed the clear all reset bootloader from 0.11.2, and tried to step up again - but no luck.

Can someone provide some assistance? 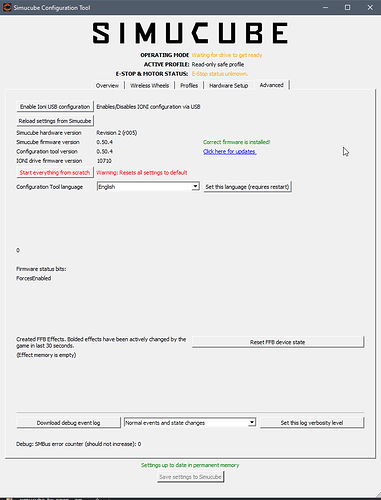 So it idles at “waiting for the drive to get ready” state?

Get it completely setup with 11.2
Do motor and encoder configuration etc.
Get on track and have fun.

Do not install anything above that at this moment. It is the most reliable version to date.
The D firmware has a bug in the bumpstops.

They are working on a new firmware release, but unsure when it will be released.

Yes you will need to set up the system to working order with 0.11.2.

Will give it another shot at 0.11.2, but even at that version, the configuration of the motor and encoder was not possible. The drive did not initialize, and the system never detected state of e-stop.

LEDs on the Simucube: the red LEDs next to power never lit after installing firmware as stated by Setup instructions.

Will revert to the reset bootloader from 0.11.2, install the same firmware.

E-stop signal and 5V should be wired through NC in E-stop switch correct?

You can monitor the e-stop signal state in Granity. 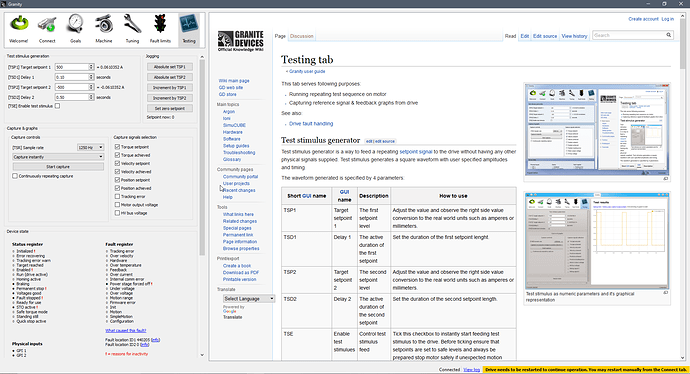 it shows you have STO active, that is, e-stop is pressed in.

I’m shorting the E-stop, no change in status.

Does Granity require a motor configuration before this can work? After initially reflashing with the reset bootloader, the IONI flashes green, but eventually falls back to flashing red LEDs. Uncertain if I’m doing that, because I’m not yet writing any settings to the card.

The STO signal should toggle almost live. You will need motor configuration before Simucube will work.

Show all status fields from Granity. You are showing fault 440205 “Power stage forced off due to one or more of following reasons: over voltage, over temperature, over current, STO or short circuit active”

which could indicate wrong settings for the motor or PSU.

Especially the Over Current Tolerance should be Maximum and the Overvoltage Fault Limit should be around PSU voltage + 1.5 V (or more). Your testing tab screenshot does not show the HV Bus voltage, it would be there if you scroll down.

I Seem to be making progress now - after setting up a motor configuration in Granity, cribbing from a AKM53k DRC file BEano had posted a while back.

Currently, I’m using a 24V Meanwell NDR-480-24 - I don’t have a 48V available at this time.
Seems I’m undervoltage, so perhaps those settings are inaccurate. I can put a meter on the PSU, but, are there safe defaults I can set for a 24V?

OK, MCC 9.3A per Kollmorgen sheet and MMC of around 11A at least gets me through configuration.
The spec sheet for the motor calls out peak current 27.8A - is that not an accurate value - or, only accurate if running a 48V power supply?

Will continue tinkering, but if anyone stops by and has an AKM52K or similar, I would appreciate a screenshot of your motor setup.

it is an accurate value but maybe it is in rms and not in peak of sine. When using a 48v power supply though you may need a bigger supply since amps * volt = watt . Although it is not simple as that since in driving conditions max is not always needed. Amps though are also tied to the ioni you are using, is it the ioni pro hc model ? If i am correct 15A IONI , 18A IONI Pro and 25A IONI Pro HC (peak of sine) . So you could try for example Mcc = 19 or 19.5 and Mmc = 20 and go from there.

also make sure that the mms setting is the rpm for your motor , in case you used a drc for another motor. Also after setting everything up , click “Measure resistance & inductance” button to get MR and ML values

Since you have the AKM52K which has a high rpm speed using an 24v should not be a bad combo, maybe it is even better than using a 48v .Someone else with more knowledge could elaborate on that.

This is from Beano a long time ago:

[QUOTE]
Some time ago, I got my hands on a brand new AKM53K servo, it was from a sale Davy Watts had on iRacing. I got one of the few with the 40k Comcoder option, as such it will make for a very good platform for an OSW, wouldn’t you think?

Well, the one caveat about using the AKM-K series over the AKM-G series servos, is the fact that the K series is wired for speed, as opposed to the G-series’ torque. The K have a speed of 4,500 rpm, and as such, it would be totally animalistic if paired with a 48V psu.

Well, Ollie Aina over in the UK has requested me to do some 24V testing on the SimuCube, as he has experienced phasing issues at this voltage with some of his earlier IONI builds, and I have decided to pair a very nice NDR-480-24V psu, with the AKM53K. (Thanx Ollie!)

The absolute beauty of this NDR-480-24V is, that it seems to be using the same enclosure as the SDR-480-48 psu…why is this important…SimuCube was released recently, and I ordered 2 upgrade kits, which, as we know, allowed for several psu options…mine was the SDR psu upgrade.

One unit has the SDR 48V psu installed, it is up and running and powering my Lenze setup currently - whilst I have decided to pair the 2nd unit with this 24V psu, and use it to drove the AKM53K servo. It works out really well, as now I can drive the K-servo to its peak of ~30NM as well, having heaps of torque, with realising the benefits of a super smooth servo[/QUOTE]

I recall reading that quote from Beano when I was researching/acquiring my hardware. My AKM52K was a bargain on eBay (~$250 USD including shielded cables). It only has the 2048ppr encoder (AKM52K-ANCN2-00). Accu-Coder couldn’t tell me much about it besides pin-out, as it’s a Kollmorgen proprietary encoder. I should also note, the label states it’s max RPM at 6,000; perhaps the bigger AM53K is a bit slower.

Anyways, I recall a thread about calculating those values RMS/peak of sine - need to brush up on my math and see what I can figure out. I hope to update this thread with what I land on. For whoever in the future stumbles across this

To answer your question: IONI ProHC is my drive. I was able to turn a few test laps and confirm it works - yay! Now to spend some time tuning. Should anyone swing by and have a setup - or near enough to server as inspiration, I would appreciate it.

Also, if anyone has details on converting the AKM servos to a higher resolution encoder, I’m all ears. Heidenhain in the 21-bit are rare, and seems no one is parting Kollmorgens with their 10k/BiSS encoders. Uncertain what other Frankenstein conversions are possible - thought is saw mention of fitting a Mige BiSS-C somewhere, though I can’t find the encoders if I wanted to. I’ve seen some encoders similar spec’d to the Mige/Heidenhain on Alibab, but I’m hesitant to buy site unseen and take my servo out of action for too long (after all I just got it working!).

Thanks for all the help! And if Beano swings by, thank you to him for all of the info - made this a relatively straight forward build.

Then set Mms to 6000rpm . Try the values i told you if you have time , no need to invest your time in calculating all those values , just drive!

@Loukas_Bourdas - first, thank you very kindly for offering your suggestions above. Using those settings with my AKM52K really brought the wheel to life.

Seems upon a cold start, I have MCC/MMC too close as I get an undervoltage error; I’ve read in another thread Brion commented on how to address that - will attempt next time I’m at the wheel.

I will continue to tweak. But for the time being I expect I will have plenty of fun with my wheel. Might stick some kind of heat sink on the servo’s body as I noticed it’s finally warm from use with the higher settings.

In the future, I will be looking to upgrade the encoder in this servo as it’s the base AKM 2048PPR; in correspondence with Brion when purchasing some PenguinRC gear - he recommended the Mige BiSS-C could be adapted, and would be more cost efficient than trying to find an AKM Heidenhain or Hengstler.

Thanks to the Granite Devices team, Brion, Beano, and Loukas - I’m in a good place to go racing for a while. Will add any tips specific to the AKM here for future DIY folks.

what values do you have now for mcc/mmc ? we could help eliminate that undervoltage error upon cold start.

Reading through a post from Brion over here: Can’t run higher amps without undervoltage

It’s most likely I’m just getting tripped up due to those values being close together. I’ve tracked down the DRC files mentioned in that post and hope to review them sometime today and test a bit. Have to complete house chores first though

Granity does warn against a value lower than 20V for the FOV/FUV settings - I set as you suggested, as I have a 24V PSU. Safe to ignore that warning? Obviously worked well with those settings, but my electrical engineering skills are not strong so missing a lot of the power/amperage/resistance stuff and therefore assuming.