What feels like is happening at the moment is as soon as there is any ffb felt on the wheel it seems to notch and not give a smooth movement. The wheel will pull hard to the notch while turning the wheel then push out of the notch while cornering harder.

I have tried different .drc file (the one provided by augury and one from iracing forum). Both feel the same.

In the video, I demonstrate while the car is not moving, but it is also doing it while driving. More I turn the wheel rapidly, less I feel it but it is still there.

Any ideas on what could be causing this? 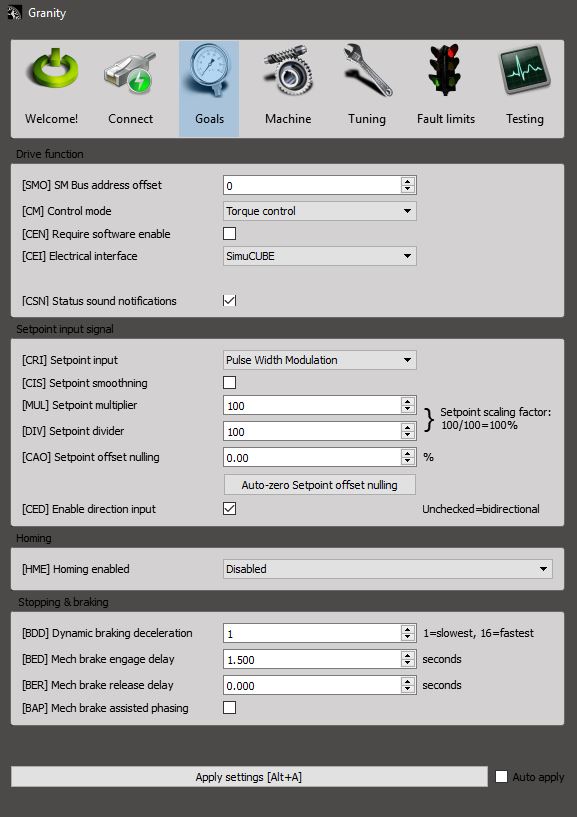 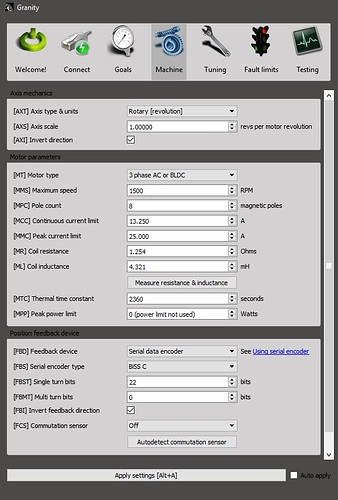 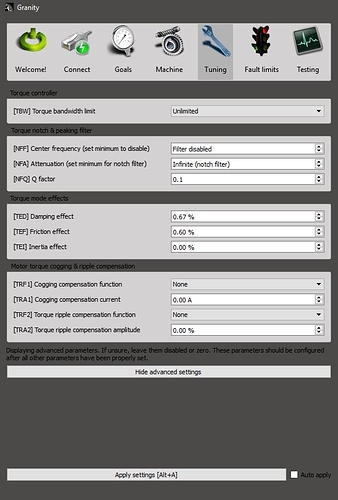 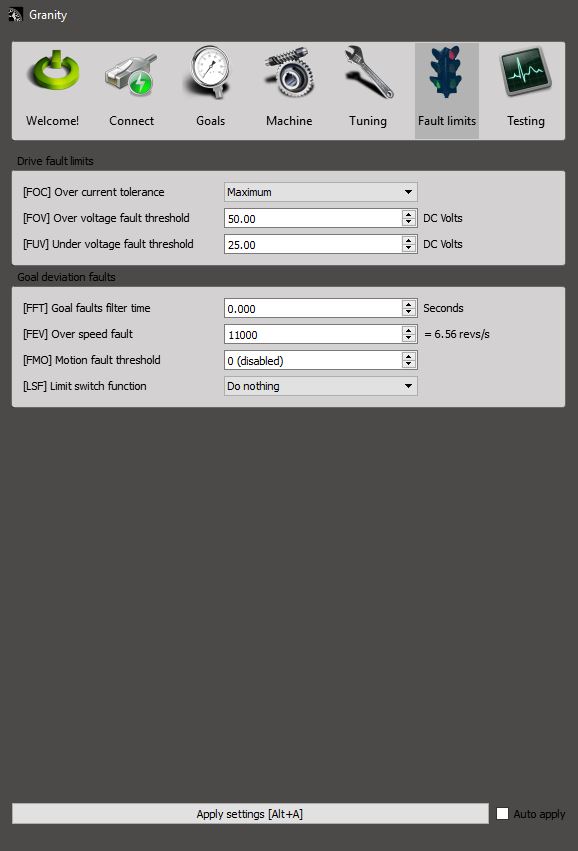 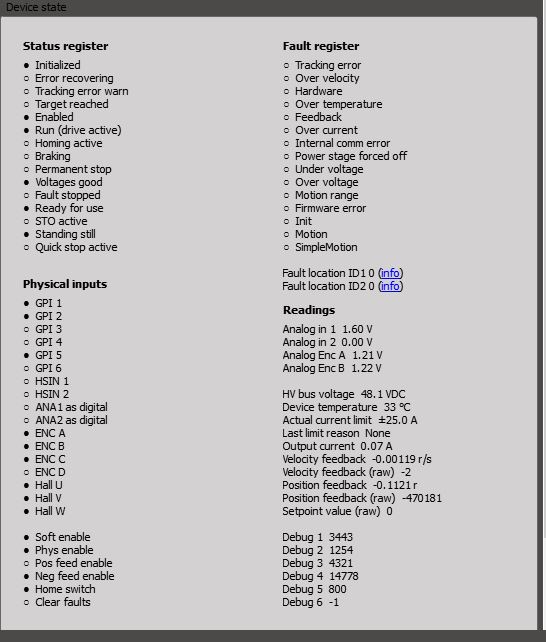 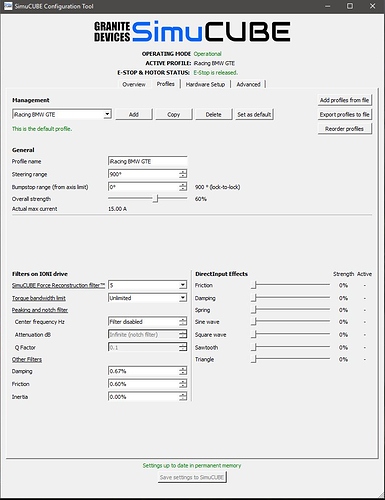 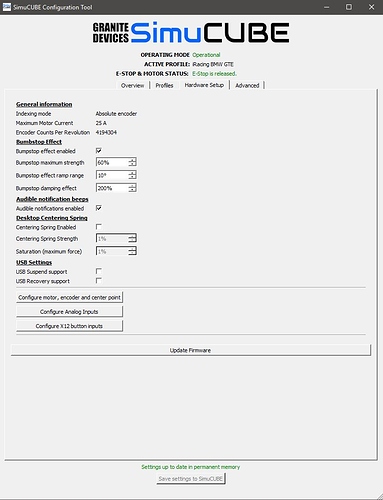 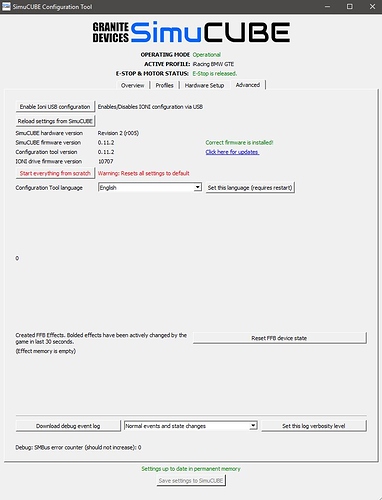 If other effects, such as the desktop centering spring produces smooth torque, then this effect is due to iRacing physics engine. It should feel good when driving.

Thanks for the reply Mika. If I understand you correctly, you suggest to try to enable desktop centering spring ?

Yes, it would tell if there is something wrong in the settings or not. Smooth spring = settings ok.

With desktop centering spring ON:
Ingame = no change, notch is still present
Not in game = feel pretty smooth

Do you think it can help if I can erase everything from simucube/granity and start from scratch ? If yes, how I can do this ?

Bought OSW to have a better feeling in iracing. My previous wheel was thrustmaster ts-pc and never liked the feeling of the belt driven motor. Now I have the same feeling with the OSW. I’m a bit disappointed

Anything else I can do ?

Does it also feel like that when you are driving?

Also try to verify that you do not have a custom force maps for your previous wheel.

After further testing, I thing I have some cogging issue.

While running irFFB, I dont feel the cogging when turning. But I dont want to continue to use irFFB because of the added latency. I want to try fixing the issue with stock FFB.

With my posted settings, is there a way to try to lower the cogging effect while turning ?

Its not an issue that comes from servo motor cogging if the torque is is smooth when using the Desktop Centering Spring.

You are feeling the poor FFB in iRacing, and there are no ideal solutions for that.

your rcon is way too low with 5 it will feel like a digital nocthy signal.

this video explains it all:

and from this older video


use this for the iracing settings for in the inis and in the game only.
USE THE Simucube / wheel settings from the first video.

its amaizing how many people are driving around with bad settings

I will definitely try that. thanks

Thanks again for your videos Seb.
You might want to amend the second one as you contradict the advice in the first - you recommend recon at 1-5 because anything over 5 will “become slow and sluggish”.

But you have recommended recon 8 for some time now, which I agree with as lower settings introduce a lot of noise/chatter.
In your first video (newer one) you talk of why you need to get to recon 8 before the signal noise goes away.

Out of interest, why did your mind change about using recon 8 if you felt it was slow and sluggish?

rcon doesnt make it slow or sluggisch only smoother i think i advised 5 in the old video which suppose to be specially made for the 60hz signal. but 8 does a much better job.

I could get away with it in the beginning because i was running pretty low ffb strength when i just started out.
with the new settings you can actually use much more ffb strength which actually adds more detail.
And you wont have the problem of a jumpy or jerky wheel.

( and on the side why i was so stuck with running no damping or inertia at all was because it was totally impossible too use that on slow/weak consumer wheels that don’t have enough strength and speed. like a g25 or CSW i was still totally convinced not too use it because it makes the wheel too slow. But with a osw that’s not a problem. and the ffb signal from the games are actually the biggest bottleneck)

There is a downside in high recon filter values, such as 9-10, where if the FFB changes direction very sharply, the output of the filter has an overshoot and a bit of lag.

Reconstruction filter is near a limit on what IONI can implement, and right now we are investigating even more smooth but still very fast reacting solutions.