Has anyone got a good profile for the Radical SR10 on iRacing?

I usually use Giorgio_Zegretti profiles and love the feel of his Radical SR10 but the thing oscillates like crazy when i dont have my hands on the wheel or when i’m driving down the straight. The other profiles felt very light to me, i’ll try tweaking the available profiles but thought i’d ask while if anyones got a good one while i’m looking into the oscillating. Thanks Pete

I haven’t driven the SR10 yet but you can my profile if you like. I mostly driver GT3 and the LMP2 and get no oscillation but I do still get pretty bad oscillation in the IR18. You could also increase friction or ultra low latency to reduce oscillation 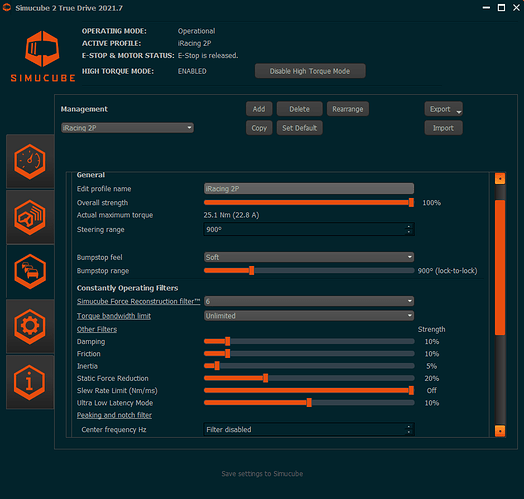 Thanks for the help designamk1, its still oscillating like nuts, even with the modifications you mentioned. It probably explains why the other profiles online felt so light, they probably had to do that to stop the oscillations.

It might seem counterintuitive but the only way I was able to reduce oscillation in the IR18 without turning up the other filter too much was by increasing inertia. I’ll give the SR10 a try during maintenance

This is due to the way th inertia filter works… It is the best filter for the majority of control over oscillation and this is because when the wheel is turning in the direction of the signal it will HELP keep it spinning BUT the counter is that when the wheel is rotating OPPOSITE the direction of the signal it will effectively act as a brake and slow the wheel.

The reason why oscillations occur is that the game sends a signal to the wheel to move it in a direction becasue it received a signal that it is not located on the point where the steering should be according to the game. This could be due to a road bump, excessive vibration, or just you happening to turn the wheel. If your hands are on the wheel you will feel this as the centering forces, however, if the discrepancy is too high between the location of the wheel and where it should be the wheel will send a stronger signal.

This stronger signal can have the tendency to then overshoot its intended target point (more common if you use to little filtering), once it overshoots this location the system goes NO WAIT… GO THERE… and it sends an opposite signal strong enough to counter the direction the wheel and return it to the point at which it was intended to be at… Problem is with your hands off the wheel OR if the power is high on the wheel this can again get into a repetitive overshoot situation and HENCE oscillations.

The filters but mostly the inertia filter act like your hands are on the wheel without them actually being there OR as forceful as needed. so they help control the wheel.

The goal in setting up a wheel should be to control the servo to avoid these situations… With a good set-up that controls the servo it will impart very little coloration to the driving experience and let you be able to feel pretty much what all cars are doing from the game output in the way it is intended.

How is that different from damper, that also acts as a brake, proportional to applied force.

Thanks for the explanation. It makes sense. Think I’m slowly wrapping my head around all these filters work

Basically the feel effect of the damper is a more solid static location and a smooth transition into that stopped or limited movement area. Helps you be more precise when you get around the intended location the FFB system is receiving.

Can’t claim that I fully understand that explanation, my interpretation is that inertia acts more effectively on direction change, when damper gets more progressively resistant the faster you move the wheel, so it’s more laggy in that respect as you need to build up some speed.

Sort of on inertia and opposite on damping.

Damping:
Adds braking as the wheel rotation speed SLOWS…
EDIT: (or accelerates added for clarification (see below) though in Sim context you rarely feel its effect in an acceleration moment)

Friction:
Adds a % of braking at all times…

So what I was trying to describe the feeling it gives in a simulator context… the Dampener is based on Acceleration/Deceleration… So constant motion or Rotation are not really affected by the damper… so as the rotation passes over the set point at a more constant rate the damper has MUCH less effect but as it is decelerating or accelerating it does… In the Sim the dampening really doesn’t have that much effect on the acceleration of the wheel as it is being backed by more force do to the next signal being sent saying Get to this point but as you decelerate toward the point the FFB is generally NOT trying to provide more torque as the Endpoints and Locations would tend to match more… So if there is an alteration in the rotational change from point to point at these lower torque moments the damping will be more effective.

Traditional filter controls for servos sot of work a little different with end result in a FFB situation that what might happen in a traditional CNC control and the reason is that IF there was only a signal and then an endpoint then the action would be to go to that point and then try to hit the mark as close as possible.

But in a FFB situation the action is go to that endpoint and try to hit that mark but if you miss it you are going to get a counter signal from the FFB system which somewhat resets. All while also getting variable resistance torque from the user instead of a constant inertia mass of say a gantry or a robotic arm.

This is why Damping with FFB is tricky… it it isn’t quite as straight forward in the way it reacts as Friction or even Inertia as you can overcome the damping effect pretty easily with your movement OR the FFB system can do the same with it’s new signal response… basically negating its effect.

Not sure how deceleration plays role in increasing damper resistance. It is always in direct proportion to wheel rotation speed. This is chart describing how Damper Saturation works in MMOs, but the blue line demonstrates how it works without saturation, i.e. TD use case, speed goes up, damper goes up, speed goes down so does damper resistance. And if speed is constant, it’s still there proportional to the whatever constant speed is. 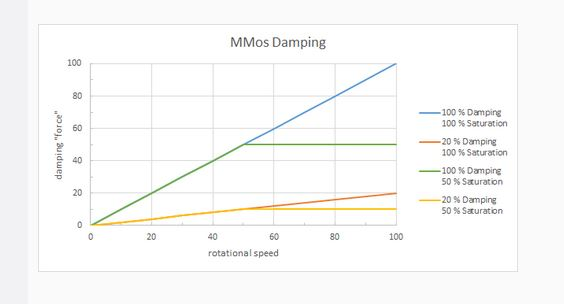 What you are describing is basically friction which is a a % of torque at any rotation speed. whether a ramp up during acceleration or deceleration or a force % at a constant rotation… In FFB Friction is the filter that will tend cause a feeling of a delayed or slower response. BTW, Friction is a type of Damping system…

Damping will cause a heavier feeling under certain conditions but not all and will help minor oscillations because of the ramp up/down braking. Inertial however causes the largest brake force when FFB overshoots so it actually works best to control FFB oscillations… In non FFB situations Inertia does not actually do this same thing… As Non FFB systems are not nearly as active with endpoint locations so close together and coming every 60th of a second (in iRacings refresh). Inertial is really to help move heavier loads faster at the expense of a greater overshoot of the endpoint which would require more Damping to slow and return to the correct endpoint location. Basically it has time to finish a location event prior to getting a new signal for a new location.

Same concepts but because of out external variable resistance (our input things react a bit differently).

What I am describing is more of a critically dampened state which is optimal to stop oscillation provided those oscillations are coming from a single event. Most of the time, however, DD wheels are run in a under dampened state (slow return to zero state) either because we set it that way or the forces are changing so rapidly that damping never really takes full effect. This causes a feeling of chasing the wheel, tank slapping, inaccuracy, user input of sawing at the wheel to get a sense of where the car is pointed. DD wheels actually tend to feel better if you can get as close to critically dampened as possible (fast return to a zero state) or even slightly over dampened (delayed return to zero state) meaning that when you stop turning the wheel the wheel stops trying to be turned and if it need to be turned a little more it slowly gets to its position rather than by a rapid movement.

the Damping application itself is apllied when motion is occurring which is what you are saying… which is true if the object is in motion damping will be applied. The result of damping is to get the motion to stop or return to a zero state (th constant is a zero state or zero movement)… The thing with force feedback is that we are at zero rotation states or very close to it most of the time as when turning the system is expecting the wheel to be at the turned location. it is only generally in movements that are active of the cars movement that damping ever really taks effect (i.e self centering movements). So as you turn the wheel YOU ar the one actually acting as most of the damping so it has honestly a very small effect, hence why you can run MASSIVE amounts of damping % at many cases which are barely noticeable…

Inertia on the other hand resists your movements as well as the the damping movements when going against a force being applied so in terms of FFB inertia actually acts MORE like what a normal Damping system should work.