Coming from the Fanatec csl DD I thought the larger 30nm mige motor would be a huge upgrade but it just isn’t, I’m still clipping just as bad if not worse at what feels like the same amount of torque. Also the base is getting very hot while testing. Tried a lot of different settings and just can’t get the simucube to feel any good. Any help would be greatly appreciated thanks in advance. 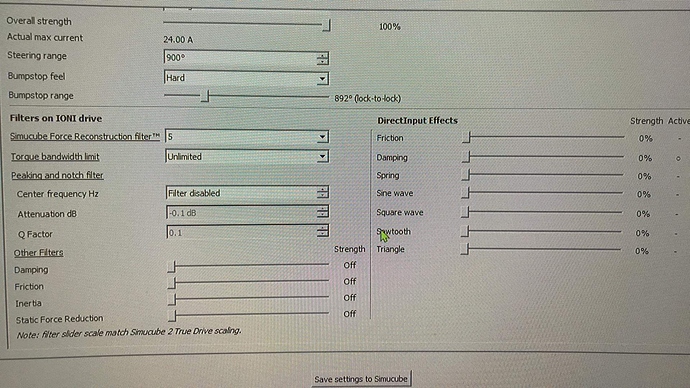 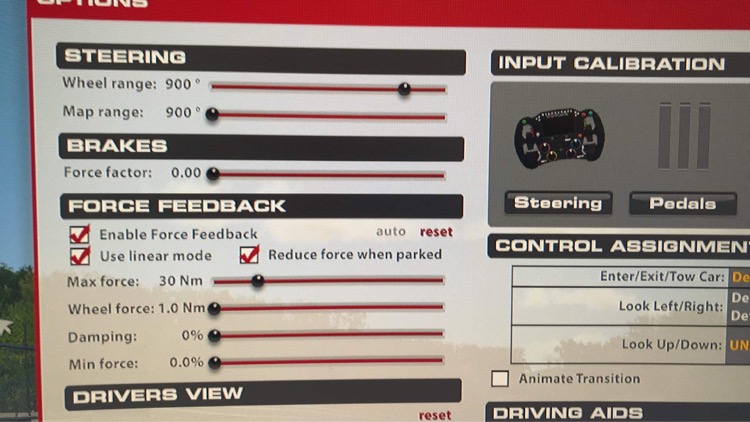 Chris set your wheel force in Iracing UI to the NM you have your wheel set for. Then try again and set your max force to a level that doesn’t clip.

Thanks Gavin for your reply, I did try that originally because that is how I would normally set my wheel up, same results

I got these setting off of this forum somewhere…

I believe there may be an issue with this wheelbase, I shouldn’t be clipping at all imo at 30nm. I’m currently going through a pay pal dispute to try and get my money back

You can still clip with 30Nm but is does seem like something might be off… You are running approx 26.784Nm according to the numbers you have displayed on your photos (OR actually that is what you should be running. The 30Nm Servo NEVER will actually get to 30Nm due to the limitation of 25A POS on the controller, the most it will reach is 27.9Nm

Now with the settings you show you should have a VERY heavy wheel as you are almost at 1:1 on the at the wheel strength (actual by you numbers would be .893:1) which is pretty strong.

Clipping however is determined by the Max Force Number in iRacing so if you are running 30 like is being shown in your picture and you are running a car like the IR18 you would probably get some pretty significant clipping. at 30Nm there are a good many GT cars that would still clip as well.

Are there any faults that are showing up in the software?

Hi there thanks for the info and your help. You say the wheel should feel heavy with those settings but it never did unfortunately, it felt very similar in strength to the 8nm wheel I have maybe even weaker. No there are not faults, I did however manage to get it turned up so high that the FFB cut out and the writing at the top of the simucube page went from green to red. Turned it off then on again and it was ok again.

What cars are you running with?

GT3s mostly and the Audi 90 GTO I was testing with. The main reason for wanting to upgrade was the clipping of the csl dd. I’m finding the mige to be clipping just as much if not more in some cases. Not to mention to mige is getting really hot like almost untouchable hot, is that normal? I have a short video of the electrical noise coming from the base but it’s not letting me post it here.

You can check MCC and MMC in Granite Software, Maybe there’s something wrong with the settings.

Wheel force: 1nm, is this the reason for the problem?

Wheel force slider does not affect FFB in any way, except for when driver chooses to use the Automatic FFB Strength adjustment that is available via the black box. The value of the slider isn’t even saved…

It gives very inconsistent results. Suggestion is not to use it, as it only adds confusion.

Okay, thanks for the answer

Thanks for all your help guys appreciate it. I no long own the wheelbase it was returned to the seller.