FFB changed and i'm all out of idea's

After almost 2 weeks of trying and a lot of frustration i decided to post my issue here in hopes someone maybe recognizes my issue of has any more idea’s what i could try.
English is not my native language and i want to post as much info as can so it may not be the prettiest of threads.

About 2 weeks ago my FFB forces/feel changed overnight without doing anything to my settings and i cannot seem to find out whats causing the issue.
Its not going to be easy to write down how it “feels” but the easiest way to explain is that the difference in FFB force between having little to no grip and having grip is absolutely huge which makes it feel as the FFB just dissapears for a split second with every correction the wheel/FFB wants to do.

For instance locking up the front brakes normally would make the wheel lighter but you could still feel resistance of the steering rack and small road details.
When i lock up the front wheels now the wheel just weighs nothing, no ffb what so ever until i depress the brake pedal and the wheel snaps back with tremendous force.

even going over lines on the track and going off track with one wheel will produce such a fast/high effect the wheel makes a “bonk” sound, you know to accelerate the mass of the wheel and rotor not because something is loose or anything.
Going over bumpy area’s also produce a lot of bonk sounds because the difference between the FFB forces are so huge.and i’m struggling to keep the wheel still.

Its really hard to explain but it also makes driving feel very choppy, some forces are still smooth but small forces / spikes are being ramped in and out way to hard.
Another example is going through a long corner which has a decent amount of FFB, the feel of the forces reacting on the wheel to push it back to center feel great but if there is a stone or a small crack in the surface the FFB dissapears for a split second which results in turning in the wheel to much.

These weird spike effects happen in all the games i play on this rig so i started to suspect firmware or motor/encoder settings which maybe got changed somehow.

After my first efforts to fix this i found out i could upgrade to Simucube when i was searching for a possibleupgrade as i was still running a firmware from 2017 and decided to give it a go hoping a different firmware would be a good start.
I was still running mmos2014 so a new UI would also be refreshing after all these years.
Did the updates and got it up and running again in no time but sadly it didnt help one bit, if anything this update to simucube actually made it worse.
Probably because simucube is better at sending more details through FFB so i get even more of these smaller forces / spikes.

So far ive tried different LUT files, gains on high/low, damper settings, friction settings, all the FFB tricks these games may have like INI changes, different profiles, tried different steering lock degrees, effect filters in games and in profiles from high to low and different torque bandwith settings but these spikes and massive difference in forces simply wont go away.

Last example i want to give is in Assetto corsa i used to have 8 to 15% extra effects such as ABS and curb to make those effects a little more pronounced, after this issue started i had to turn them down to 0 and they are still 10x as strong as they were before while to overall FFB strength is still roughly the same meaning i could turn down the ffb to have a decent drive and then getting my hands ripped off because one wheel hit 2 inches of curb or hits a patch of grass.

My setup is a small mige with the 40000 encoder, Ioni pro / simucube board and 20A PSU bought as a kit with the black square case.
Granite doesnt show any fault either even after man handling the wheel for hours trying to dial in the FFB.
I also recalibrated the resistance of the coils in granite which changed the value’s a little bit but this is probably because of temperature and also didnt help my issue.

Edit: found a different thread were someone also felt FFB was over the top and not smooth anymore, the advice was setting MMC lower and setting the DIV multiplier to 50, i did lower the amps but the multiplier was already at 50.
Lowering it more looks like it would work at first but after upping the gain to compensate the feeling is the same.

Any help of info would be appreciated 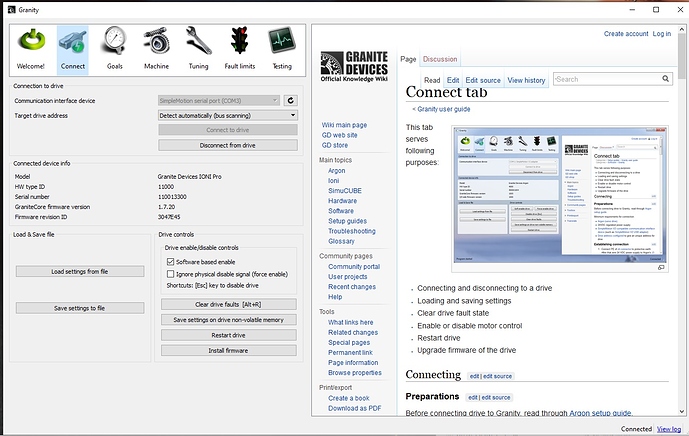 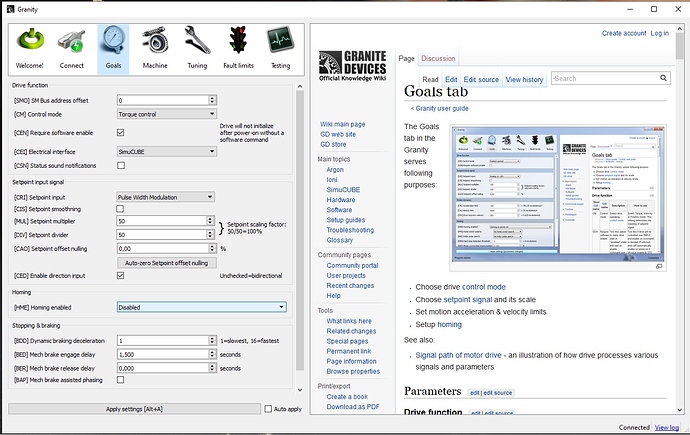 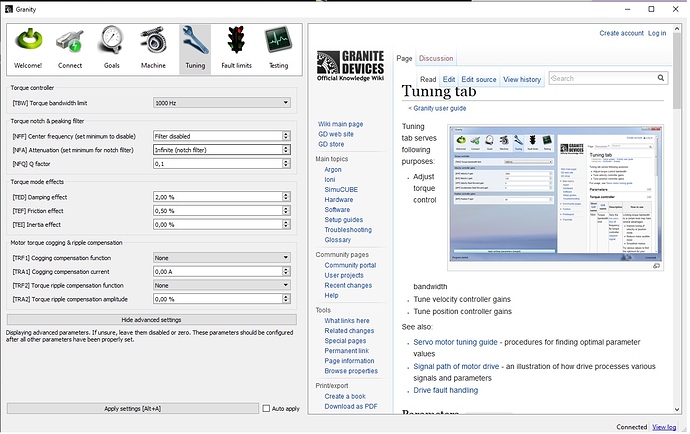 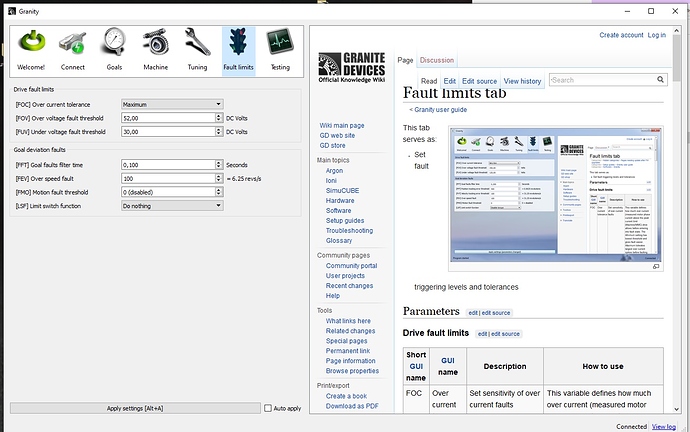 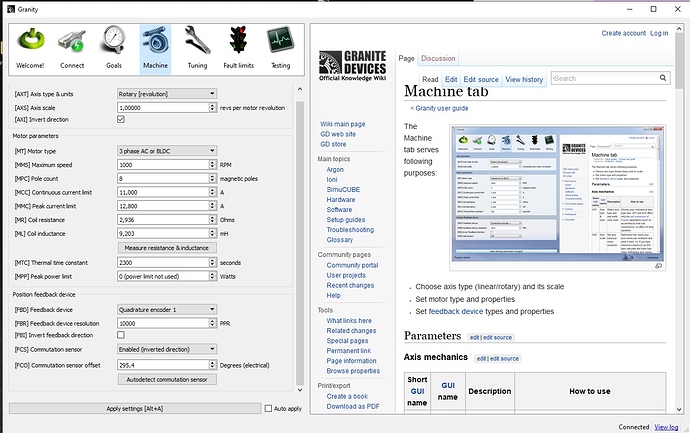 Really sucks to see i didnt get any response, maybe its because of how i explained everything and making it somewhat hard to read or maybe i’m just unlucky and there is no real answer.
I know it is a weird issue and i already knew it was going to be hard to find out what made this change in FFB but ive had this wheel for 3 maybe 4 years now and in these years installed it several times on multiple systems, which always gave the same feeling in FFB.
Ive build a whole 2 DOF motion rig around it with multiple Symprojects usb boards and all custom made parts like the wheel and shifter and even the handbrake.
This project took a lot of hours to build and ive used and enjoyed it for years as this is one of my favourite hobby’s
Then, my FFB changed overnight (no joke) and it changed so much that i dont enjoy driving anymore and that just sucks, havent touched it in almost 2 weeks and thats just sad.

So, After taking a break for almost 2 weeks i picked it up again where i left off and tried many things like new usb wiring and hooking up the wheel directly to my pc with literally everything else disconnected but no change.
The only thing i havent tried was a new windows install and so i spend the whole day yesterday backing up files and installing the new os and i can finally say… its still the same

Could it be a faulty board? either the motor controller or the simucube board?.
Is there a way to test these? update them or reset them to default?
Could such a board maybe get shipped to me to swap it out and test?.

One last thing i noticed which i cant dubble check right now as i dont have granite installed yet on this OS is that i could move my wheel slowly in either direction while granite would still report the wheel was “standing still”.
The slowest rate of acceleration it would report was something like 0.6xxxxx, anything slower and it would report being stationary.
Dont know if this is just the lowest granite will show but i can imagine if the software “thinks” this is the slowest acceleration to send out to the wheel it would feel very spiky if thats even a word haha.

The “standing still” bit is only informational for industrial users of the servo drives, it isn’t used in torque controller calculations.

I would say the change - if it also affected you on MMOS firmware and started on its own, could be related to hardware. But I do not have any intuition on what hardware fault could cause symptoms that you describe. Usually the IONI would indicate faults ID if it noticed something strange.