Question about the relationship between Damping / Friction / Intertia versus FFB Overall Strengt.

I personally like to drive with lower force (60% in TD and around 50Nm on BMW M8 in Iracing as an example, SC2 Pro).

If I drive with lower force this should in theory mean that I should lower my Damping / Friction / Intertia values right? A “lighter” wheel gives me more detail when drive with lower Overall Strenght is my thought? Correct or am I wrong here?

Generally speaking that is the case that lower strength required less filtering as the Servo itself does not have as much of a tendancy to get out of control… However you can still over or under filter at will to get a certain feel from the wheel that you may prefer. Such as a small amount extra friction to reduce looseness feel of the wheel or more inertia to enhance what might feel like power steering effects at times (not exactly like power steering though)

So that being said the answer would be Maybe to arbitrarily lowering the filters based on overall strength as it may alter the feel of the wheel in a way that you wont like.

Aren’t they supposed to scale with overall strength?

Interesting… are they? @Mika

strangely by % yes… but in actuality because high forces create more movement defeating the damping our arms give then the effects are not linear… If we weren’t touching the wheel or had a consistent rotation at the wheel then the scaling would be more true.

More interested to know if it’s percentage of TD set max force or of the actual force generated which is signal strength multiplied by max force.
Pretty sure it’s latter.

Actually it’s wrong, kind of. Constant forces like friction and inertia are just that constant and are based on percentage of TD Max force, there is no signal strength in play.
Damping max force is percentage of max TD force but because it’s proportional to speed of rotation (acceleration) it needs to resist, makes it also dependent on signal strength.

Damping
Damping is a torque effect which is relatively to the speed of the torque command change rate. It dampens fast torque effects that are the result of the FFB updates from the simulator. The faster torque effect changes, the more torque is generated to resist this motion.

MMOs for instance also had Effect Saturation setting, not sure how useful it would be for SC2 users but it effectively allowed to control ramp up of Dampening resistance, see chart below.
Chart also makes it easier to understand relation between speed of rotation and max damper resistance. 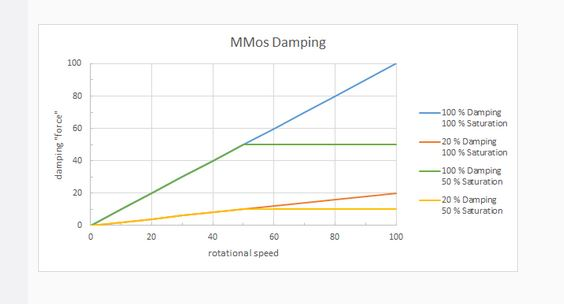 That is correct Inertia and Damping are the ones most affected by the differences in the way high strength moves the wheel as they both have a wheel rotation and movement calculation in their setting… But also yes friction amount does change as well since you are moving to a higher or lower overall strength as that is as you mention a static force applied… but that is more linear.